Forest owner Kristina Boman: “Now we know what our forest can give us.”

Forest owner Kristina Boman: “Now we know what our forest can give us.”

Kristina Boman takes great pride in managing her forest in the best possible way. Skogssällskapet’s Forest Strategy (Skogsstrategi®) helped her see more clearly what the forest offered, and also showed that financial return could be increased.

Kristina Boman and her brother Johan inherited a forest property, a small part of the Limmared forests in Västergötland, from their father, who bought the forest twenty years ago.

“We’re what are called moonlight farmers,” says Kristina. “Since we live in Stockholm, we’ve always had help to manage the forest. When our old forest manager left, we had to look for a replacement. We’re members of the Södra Skogsägarna forest owner association, and we’ve also sold wood to Derome [UL1] [LW2] – we’re satisfied with that collaboration, but felt we wanted an independent forest manager. That’s why we chose Skogssällskapet.”

The forest has been double-certified for many years, and Kristina has always felt it important to manage it in the best possible way. 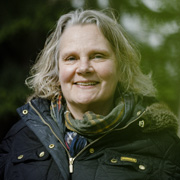 “The forest must be tidy and attractive, there must be a rich fauna, and it must be a pleasant place where local people can spend time. The property also has two hunting teams that we want good collaboration with. Owning forest is positive because of the climate benefit and because it is, and has always been, an important industry for Sweden.”

When it was time to revise the green forestry plan last year, the forest manager Johan Johansson at Skogssällskapet suggested that a Forest Strategy would benefit Kristina and her brother in working towards their goals.[LW3]

“It’s my task to propose a forest budget every year and to make proposals that match their aims for the forest. But equally important is to give the owners a solid foundation for their strategic decisions based on the forest budget, which they then decide on,” says Johan.

“The Forest Strategy takes forest ownership to another level, because it means we can calculate, already now, the outcome of different strategies. The strategy can then be continually revised, both in terms of goals such as volume growth and return, but also in terms of nature conservation, game management, and other soft values linked to the property.”

Kristina feels that the Forest Strategy has clarified the financial potential of the forest.

“Regeneration felling is a part of sustainable forestry, but now it’s much clearer which areas we should prioritise and when. Climate change is affecting forestry, and means that the rotation periods in production must be shortened slightly.”

“My experience is that the return on forest properties can often be increased, and that was indeed the case here. The Forest Strategy is often an eyeopener,” says Johan.

Kristina also feels that the Forest Strategy has been a good opportunity for her and her brother to learn more about the forest. They have discussed their plans and goals for the future that will give both a good financial return and a sustainable forestry that lives up to the environmental goals.

“The Forest Strategy is particularly good for large properties and where there are several owners. We now know, for example, the rate of felling we need and can create a more even distribution of revenues and costs.”

As forest manager, Johan says that another effect of the Forest Strategy is that he can give more precise management proposals, because he and the owners are better synchronised in terms of what goals are to be attained.

Kristina, who has a background in finance, has also completed a number of forest courses at Linnaeus University, such as Sustainable Family Forestry and a course in planning. This is something she recommends to all forest owners, because it makes the work with the forest much more enjoyable.

“The dialogue itself with the forest manager is an enjoyable aspect of owning forest,” says Kristina. “At the same time, I trust the expertise. The Forestry Plan forms the base, and combined with the Forest Strategy, it becomes even more effective. For me, it feels reassuring to have an independent manager who looks after the forest, and Skogssällskapet is both knowledgeable and at the forefront when it comes to forest issues in Sweden.”

Johan thinks that the Forest Strategy has strengthened Kristina and her brother in their decision-making and in defining their goals for the forest.

“Hopefully, they both think it’s more fun and more profitable to own forest now!”

A Forest Strategy is an analysis of what is to be done on the basis of the data in the Forestry Plan, and generates an objective action plan and long-term consequence analyses. These analyses comprise simulations of how your forest and its values will develop over time, up to 100 years into the future.

In Forest Strategy Plus, we analyse your property on the basis of your objectives and goals. This gives an objective base for how your forest can be managed to attain your goals. The result is a customised strategy that maximises the yield from your forest ownership.